Recent sharp falls across share and bond markets have been a shock, but not a surprise.

Sharp investment market falls are always jolting.  However, they have not been a surprise given economic conditions, especially inflation being at multi-decades highs around the world.

Moreover, markets have been jittery since the back end of 2021 as investors began to digest the prospect of central banks raising interest rates to combat rising inflation.  In that sense, current events are an outpouring of that build-up of worry.

Here are some figures to ponder: US inflation, as measured by the Consumer Price Index, was 8.6% in May,1 and hit 8.1% in the European Union in the same month.2

While Australia’s March quarter annual 5.1% inflation rate was comparatively less severe, the Reserve Bank of Australia has said that inflation was likely to reach 7% by the end of this year.3

As to the causes of the inflationary upsurge – they are varied and include:

Investors recognise that central banks, led by the US Federal Reserve (the Fed), will have to keep hiking official interest rates until they eventually slow economic activity and reduce inflation.

At the time of writing, the Fed had just announced a 0.75% rise in official American interest rates, the highest single rise since 1994. In its commentary, the Fed made clear that more large rate increases were to come.4

The investment community acknowledges the necessity for higher interest rates to confront inflation, but also fears that interest rate hikes will end up crunching economies.

The issue with rising inflation is that the higher borrowing interest costs that follow reduces the future value of companies’ cash flows measured in present day terms. So, as interest rates rise, the value assigned to companies’ earnings decline.

So, the current transition from ultra-low to higher but more ‘normal’ interest rates has seen share values take a hit. At this moment, US earnings expectations are still solid, but that isn’t offering much defence as investors lower their valuations for shares. 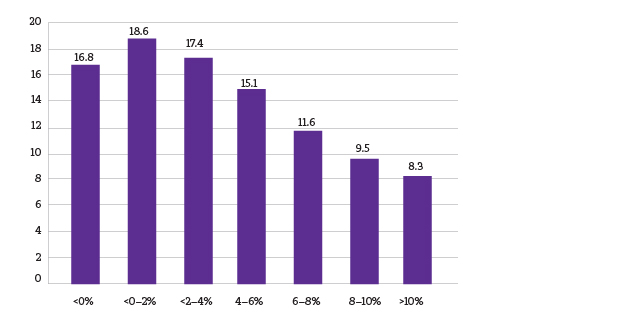 Trying to predict market turning points is a fool’s errand. Nevertheless, we can gain some knowledge from the past.

Markets tend to bottom and then begin to recover after dramatic market events – such as the October 1987 crash, the 1994 bond market sell-off, the bursting of the tech bubble in 2000, the 2008/09 GFC, and the March 2020 COVID-crash – when central bank (and government) policies become more sympathetic.

This time around, central banks are constrained by high inflation so even if economies and share markets struggle, central banks appear likely to maintain higher interest rates for longer to keep inflationary pressures in check.

Our investment team prepared for the inflationary upswing and that’s reflected in how we are managing and positioning the MySuper portfolios, as discussed below.

We began reconfiguring the MySuper portfolios6 for inflation before prices started building up a head of steam.

Traditional fixed income assets are increasingly unattractive propositions as inflation gains a grip.  This, though, doesn’t mean that investors should walk away from all forms of fixed income.

Some of our inflation-resilient investments include ‘private credit’, which can be thought of as loans the MySuper portfolios’ make to commercial borrowers.

Some of our private credit investments provide income streams across legal, government and corporate receivables. Cash flows from these sources tend not to move in-step with those from companies listed on share markets, and thus contributes to overall portfolio diversification. They’ve also been providing returns above inflation, and so we’ve been pleased with what they’ve brought to the MySuper portfolios.

Commodities are another example of assets that do well during periods of rising inflation.

Prices for a host of commodities ranging from oil and gas, to wheat, and minerals and metals, have been galloping. Early last year, we provided the MySuper portfolios with exposure to rising commodity prices with a basket of investments across metals, energy, and agriculture. This exposure to commodities has benefited members who have been invested into MySuper over the past 12 months.

Returns from such infrastructure businesses are not linked to shares and bonds. Additionally, they have reliable income streams as their cash flows are sourced from locked-in contract prices, as well as regulatory arrangements that take inflation into consideration.

Then there are skill-based liquid trading strategies that can go short as well as long. Freeing managers from the long-only constraint empowers them to act more fully on their views than is possible with long-only investing with global macro and trend following strategies that can make money from being short equities and short bonds at the right time.

Finally, there are listed share market investments where the MySuper portfolios’ emphasis on companies with, what we judge to be reasonable valuations, along with earnings resilience and persistence, should potentially make them more durable in unsettled market conditions.

What all this adds up to is that the MySuper portfolios are well diversified across asset classes, within asset classes, as well as by manager styles and philosophies.

It means that they are not reliant on any single investment or type of investment to accumulate returns. Furthermore, because of diversification, they have a cushion to protect themselves against the full impact of market volatility.

5 The Price Earnings Ratio (P/E Ratio) is the relationship between a company’s share price and earnings per share (EPS). It is a popular ratio that gives investors a better sense of the value of a company.

6 https://www.mlc.com.au/personal/superannuation/products/mysuper for more about MLC MySuper.

This information is current as at June 2022 and is provided on behalf of NULIS Nominees (Australia) Limited ABN 80 008 515 633 AFSL 236465 (“we”) as trustee of the MLC Super Fund ABN 70 732 426 024. We are part of the group of companies comprising Insignia Financial Ltd (ABN 49 100 103 722) and its related bodies corporate (Insignia Financial Group). While care has been taken in the preparation of this communication, no member of the Insignia Financial Group accepts responsibility for any loss or liability incurred by you in respect of any error, omission or misrepresentation in the information in this communication.

The information contained in this communication may constitute general advice and does not take into account your objectives, financial situation or needs. Because of that, before acting on this information, you should consider its appropriateness, having regard to your objectives, financial situation and needs. You should obtain the relevant Product Disclosure Statement or other disclosure document relating to any financial product which is mentioned in this communication, and consider it before making any decision about whether to acquire or continue to hold the product. Target Market Determinations (TMDs) for relevant products are also required to be made available and considered by distributors. We recommend you obtain financial advice tailored to your own personal circumstances. A copy of the Product Disclosure Statement or other disclosure document and TMD is available upon request by phoning 13 26 52 or on our website at mlc.com.au, plum.com.au or mlcam.com.au.

Past performance is not a reliable indicator of future performance. The value of an investment may rise or fall with the changes in the market.

Opinions constitute our judgement at the time of issue and are subject to change. No member of the Insignia Financial Group gives any warranty of accuracy, nor accepts any responsibility for any loss or liability incurred by you in respect of any error, omission or misrepresentation in this communication. Any projection or other forward looking statement (‘Projection’) in this communication is provided for information purposes only. No representation is made as to the accuracy of any such Projection or that it will be met. Actual events may vary materially. This information is current as at June 2022 and may be subject to change. Subject to any terms implied by law and which cannot be excluded, we shall not be liable for any errors, omissions, defects or misrepresentations in this communication or for any loss or damage suffered by persons who use or rely on the communication.

This communication is directed to and prepared for Australian residents only.

Request a call back opens in new window and we’ll be in touch.

Email us your enquiry opens in new window